How Lightning Can Ruin Your Gear, And You Won't Even Know it 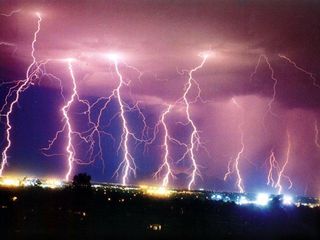 North Carolina, depending on how you measure it, is either #2, #3, or #4 for lightning strikes in the United States. [Maryland isn't quite as bad, but we get our fair share!*]  I would also suspect most of you have dealt with surge damage at some point due to a lightning strike.  I have just personally encountered what could be very frustrating for a home owner and wanted to tell my story so you could be better prepared.

As you might guess, I have quite a bit of consumer electronics in my home.  I’ve got a whole house audio system, video distribution system with several TV’s, and two home theaters.  Everything is as fully surge protected as I can make it. Every single signal path has surge protection on it.  I do not have lightning rods on my house.

About 3 weeks ago in the late evening some storms passed through and we heard a fairly loud thunder clap.  It did not sound like it was a direct hit, nor did it sound like it was right in our yard, just one of those loud bangs that felt like it was maybe a few blocks away.

The next morning, my wife complained that she could not select the Tivo she wanted to watch on our video distribution system.  I did a quick check and found the video matrix switcher locked up, did a reboot and everything was fine.  I thought to myself, that is weird, maybe the strike somehow locked up the switcher as it had worked flawlessly for 5 years.

I did not use the theater that day, but that evening my daughter complained she could get no sound in the theater.  I rebooted the Classe processor a couple of times, played around with its settings and finally got audio back there.  Now, I was starting to worry.  Nothing was broken, but this was a bad sign.

Boy was it ever.  Over the last two weeks things have gone totally downhill.  My XM tuner has died.  The TV in our bedroom will randomly turn itself on and off.  The big multichannel power amp I use for the whole house speakers started going into protection, a reboot would fix it, but last night, it totally died.  The audio is dropping out on one of my TIVO units at random times.  One of my Cisco cable card convertor boxes keeps rebooting itself randomly.  I hate to think what else will go down.

What has happened to me is what can happen to you.  Somehow I was hit even though I am fully protected.  The damage was not catastrophic, but appears to be showing up over time most likely due to stressed components.  The moral of this story is, if you hear a loud thunder clap, and you have ANY weirdness at all with your consumer electronics afterwards, call your insurance agent and warn them you might need to file a claim.

*As many of us in Maryland are aware, we're in the midst of Hurricane season, and there are quite a few storms that have made their way through our region.  Gramophone wants you to be prepared before you end up with damaged equipment.